Lately we were mostly mentioning interesting ICOs and got bored of that. In an email for subscribers we were mentioning coins to enter that are already on exchanges, but this is a public call for everyone. Meet XZC and reasons why we think it’s great!

What is Zcoin ?
It was the first coin to implement Zerocoin protocol from the same author as invented Zerocash protocol used in ZEC. XZC is an fully anonymous coin which fixes issue Bitcoin has. There is no public ledger to check all transactions and amounts at, privacy can be easily broken and tracked on usual Bitcoin-a-like blockchains. Coins that are trackable can be minted on blockchain into private ones and task can be repeated all the time to keep everything anonymous.


Whats Coming to XZC ?
Znodes, incentivized nodes that allow people to contribute to the security of the coin while getting part of the block payout is a hotly awaited feature and set to release soon. Zcoin are also set to release are a series of updates to the Zerocoin library that make Zerocoin more secure, making it the protocol’s first update in almost 4 years. They’re also set to showcase the Zerocoin technology on Ethereum with their ZEth project that would allow Zerocoin mixing on the Ethereum network. Zcoin is getting a lot of attention lately and finally having its value recognized with new markets opening in SE Asia and greatly increased interactions and trading volumes. 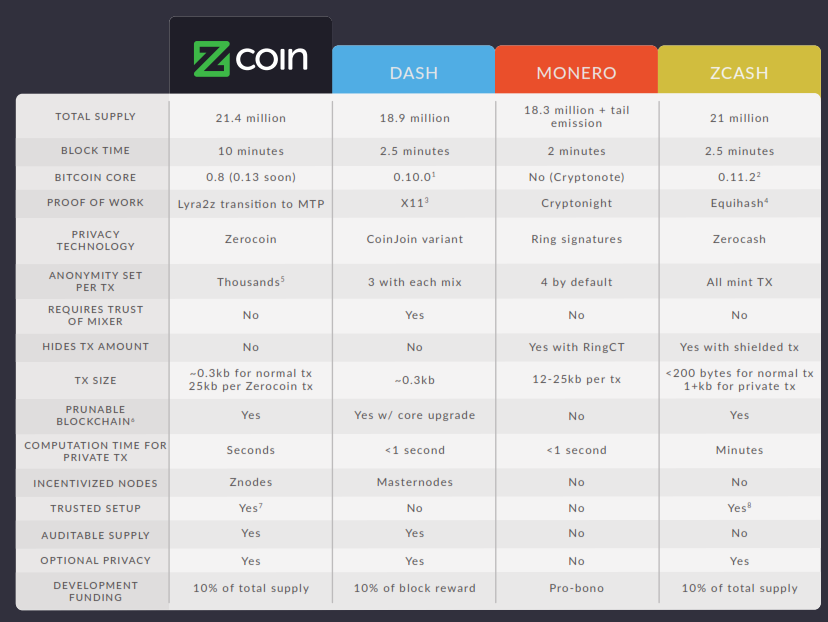 Here is comparison of XZC vs iths competitors who all are worth 200USD+ per coin. While XZC is from same niche and does many things better it looks totally undevaluated, possibly market didnt understand it yet or maybe it is in slow accumulation phase. It has loads of decent exchanges from as big Bittrex up to smaller ones like CoinExchange or Cryptopia. Also its mineable, you can use your GPU card or buy hashing power cheap ie from NiceHash to grab it.