Today we will have a look at hottest coin right now Zcash – the so called upcoming Bitcoin competitor and ways of acquiring the coin or using it to make money.


What is Zcash ?
To people not familiar it is an anonymous cryptocurrency into which loads of famous Venture Capitals and Bitcoin users invested. To give you idea of how big the names are here is a few from the list Pantera Capital, Digital Currency Group, Fenbushi Capital, London Trust Media, Evolve VC, Naval Ravikant, Niraj Mehta, David Dacus, Roger Ver .
The main difference between Zcash and other cryptos is that – you do not see amounts sent on the blockchain nor there is even public info of how many coins exist. It is an fully anonymous chain which is supossed to protect users by obfuscating information about what they buy, where and for how much. Its uses a totally new mining protocol called equihash and new code base which wasnt used in cryptocurrency before.

When did Zcash Launch ?

The coin started on October 28, 2016 and initially traded for 3000 BTC on Poloniex and numbers of this kind. It was on the second that nobody was able to have enough coins mined yet.

Then price started going down obviously with small stabilization around 70BTC per coin then having a price of 1-2,5BTC per coin for days with small tank to 0.7BTC and came back. While writign the article the coin is at 0.5 BTC.

Zcash had so called “slow launch” where initially there was not many coins and the number of coins is raising slowly hence the more coins the more people are capable to buy and sell and price changes.

How to mine Zcash ?

Zcash uses alghoritm which is efficent on both CPU and GPU meaning you can mine this coin with almost anything you have at home withot udedicated rigs or miners needed.
Since coin is very popular is not worth trying to solo-mine it also for reasons you need to be skilled to do so. Yet to get a mining software and join a pool – you will not have a single problem – even if you have never mined cryptocurrencies.

There are two ways of taking profit from mining Zcash – doing it directly into Zcash pool, get Zcash sent into exchange and sell there. You can also mine Zcash algo but instead of gettign Zcash sell your hashing power to people who want to mine it and get directly BTCs to your wallet.

f you are for the former the easiest way is to go into NiceHash and grab their 1-click miner https://github.com/nicehash/NiceHashMiner/releases and just run it, put in your BTC wallet and it will choose live best algorithm for you to mine and take best profits. Currently its Equihash and i was capable of making as much as 20USD a day per 1 GPU mining with this method. 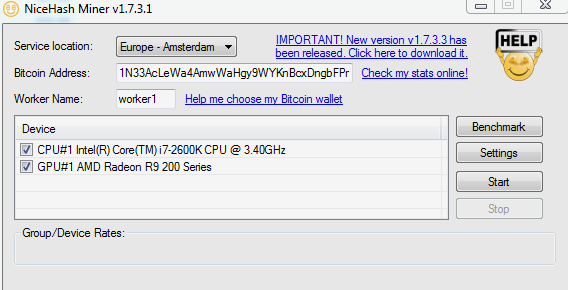 The pluses of it – its instant BTC conversion (no delays with waiting to send to exchanges or get enough coins to send), it can swap alghoritm to other if its more profitable. When coin launched, there was not many efficent miners and you needed 0.001ZEC minimum to get into exchanges and around 2 hours of sending. Mining directly for BTC here was the fastest and most secure way of taking profits.

Mine Zcash Directly
If you want to hold some Zcash for future pumps or choose price on which you gonna sell it on exchanges – then you will want to mine the coin directly. Depending on your setup there are a few different miners and usualy need a simple command line to run them on any pool ie:

for NhqMiner which is the fastest miner for CPU/CUDA (link)

Where -zpool/-l is pool adress:port and -zwal/-u is username for pool or just your Zcash wallet.

Buy hashing power for mining Zcash
Another option to obtain ZEC is to buy hashing power and direct it to your favourite pool. Just go to NiceHash, make an account and do the order. This way you dont have to mine yourself or can just add extra power to your rig for good prices. It essentially means that you pay other people to mine for you and everything they mine goes to you. Examining the marketplace and placing an order at the right time can save you some money. NiceHash offers a service similar to cloud mining but with option to buy massive hashing power and use it in short amount of time on expiring contracts. You can buy the power for as short periods of time as 1h and send it to any pool you wish. TO get it make account at NiceHash, click orders, on top right choose algo eqihash and you are good to go.

If you are not capable of mining Zcash or have no time due to many exchanges adding it and different use cases there is often arbitrage options between exchanges. There were cauntless options of buying on 1 exchange and selling at another one with profits ie buy ZEC at 28 BTC on Poloniex and sell at 34 BTC on Bittrex or buy at 1.8BTC on Poloniex and sell at 2.8 on Bitfinex – even with the time of ~2hours sending between them.